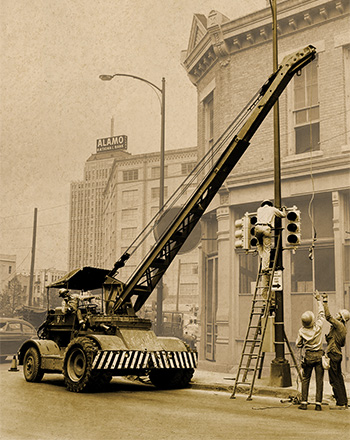 Some highlights of our history:

1950s – A commitment to innovation leads to the introduction of customer service by phone and the downtown area’s first streetlight system.

1960s – CPS Energy contributes infrastructure and power to many of San Antonio's most famous attractions, including Natural Bridge Caverns.

1970s – CPS Energy joins other Texas utilities on a jointly owned nuclear power project (today known as the South Texas Project). The opening of the new Deely plant, in the midst of the energy crisis, boosts production and saves ratepayers $125,000 in fuel costs.

2010 – One of the nation's cleanest coal units, J.K. Spruce 2, begins operation with more than $250 million of the best available emissions-control equipment.

2012 – Rio Nogales, a combined-cycle natural gas plant in Seguin, is acquired as part of strategic plan to increase low carbon fuels, and to proactively save half-a-billion dollars by not investing in Deely, the oldest coal-fired unit.

2017 – CPS Energy celebrated 75 years of being owned by the City of San Antonio. October 24, 1942, marks the day that every citizen of San Antonio became the investors and direct benefactors of CPS Energy. The original purchase price was $34 million and the return on our community’s investment has been $7 billion and reliable and affordable power.

Today – Constant innovation and expansion reduces rates – our customers’ combined energy bills rank among the lowest of the nation’s 20 largest cities – while serving over 880,000 electric customers and more than 360,000 gas customers.

CPS Energy commits millions of dollars to energy efficiency rebates and programs for our customers. Our Sustainable for Tomorrow Energy Plan (STEP) looks to reduce our community’s demand for electricity by 771 megawatts (MW) – the output of a large power plant – by 2020.

As part of San Antonio's New Energy Economy, we're also investing in innovative technologies that will: